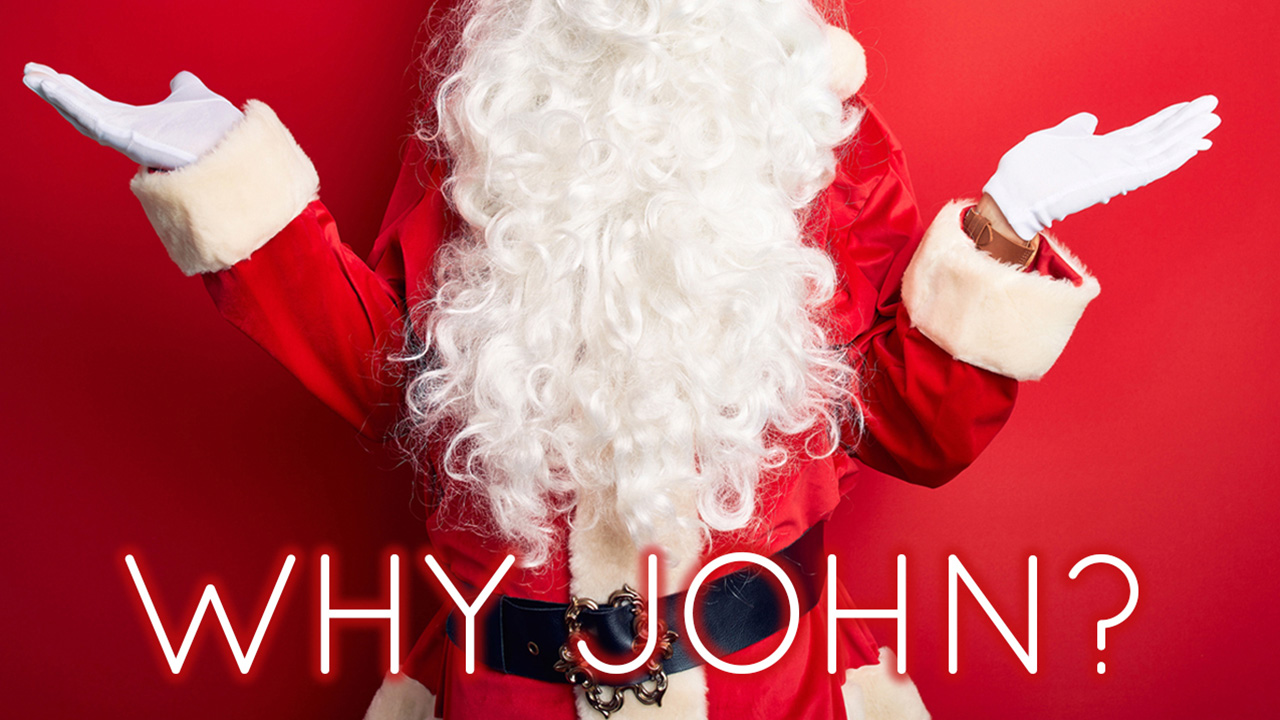 Why would you choose the name John?

I’ve never really liked my name. There were always at least two other guys named John in my classes at school, which got confusing, so I never knew if someone was talking to me or one of the others. Later on, I worked at a place that already had a guy named John, and I had to go by my last name instead, and that was even more confusing. My mom would always say that I was named after my dad’s friend, or because my name was in the Bible, but my twin sister Wendy and I knew the truth: we were named after the kids from Peter Pan. It’s just altogether not good.

So when I read this passage where the family and friends of Zechariah and Elizabeth argue about giving the baby some weird name like John, I can relate. Throughout the Bible, whenever there is mention of naming a baby, they are named either from an observation of the child when they are born, or sort of as a prediction or hope of who they will turn out to be. Consequently, some of the great people of the Old Testament end up having names with fairly odd meanings. And I get why instead of using a traditional family name, you would want to bestow that kind of blessing on your child early on – even if an angel didn’t tell you what to name them. My wife and I named our kids after great people in our lives, people who embodied characteristics we admired, even though none of those people are from our family. The name John in English is a very shortened Hebrew name which means “God is gracious” or “God has shown favor”; which is a pretty great idea to bestow on your child, sure. But for me, I’ve heard far too many associations of the toilet and my name for it to ever be a good thing for me.

So they are all arguing about naming the baby John, and it’s everyone against Elizabeth. My family is Italian, and I feel like I’ve been in a lot of tense family situations and arguments. Maybe it’s just me, but when I read this passage, I can’t help but imagine the tension in the room, and the rigid postures of everyone trying to get their own way. But then, when I think a little more about it, I don’t think it’s about them not getting their way, or having the name they wanted be picked. I think it’s a lot more basic - I feel like the argument is really about him not being named after one of them.

“Well, if you don’t name him after his father, what about me?” That at the heart of it, the argument is that they feel hurt. The hurt of not being chosen, of not being mentioned, of not being thought highly enough of, of being forgotten.

And that’s the kind of thing that at Christmas, at least for me, is always running around in my brain. When I put all kinds of thought and effort into a gift that doesn’t get received well. Or when I see pictures of people I know all having fun at a party I was never invited to. Or getting a gift from someone who should know me well enough to buy something special, but when I open it, it’s just a generic gift card. Being forgotten by people who should remember me.

There’s something else that catches my attention in this passage though: when Zechariah is finally able to open his mouth, the first thing he does is praise God. While I know that is what should be done first and all, but honestly, if I wasn’t able to speak for nearly a year, I would have a lot less praiseworthy things to say first. I would say “I told you so” to a number of people! And for all those times when I had the perfect thing to say, but hadn’t been able to, those would have been smouldering in my mouth the whole time, and it would all come streaming out. I’d probably get around to praise certainly, but not until I had settled some scores.

But that’s not how I want to be! And so, as Christmas fast approaches, I wonder if this year, I can change. I wonder if instead of seeing myself as left out because I didn't get put on some “Best of 2019” list, I could remember that I was chosen – and not just to go to a party – but to be rescued by God from all this turmoil. I mean, we all know Jesus came to save us, generally, but maybe this year, I start to feel it personally.

Maybe this year, in that quiet space between Christmas and New Year’s Day, when life seems to draw in and be still for a moment, what comes out of my mouth is praise for all the things God has done for me this year, rather than all the disappointments I have as I look back. Maybe this is the year that I actually remember that God IS gracious, and my name is more than just from a children’s story, because its meaning is true, God has shown favor to me, truly, even amidst the disappointments and loss. So here’s to hoping that we all feel chosen this year, regardless of the circumstances we find ourselves in.

John and his wife Robyn, run our Jr. High program and are parents to two daughters and two sons. When not in the youth house, John is often found behind the scenes, fixing any number of technical problems that arise during the week, or at Crescenta Valley High School teaching students in the Stage Arts classes about audio engineering.

Mothers of Preschoolers (MOPS) kicks off 9/16